The first time I heard of this film was while living in Old Louisville in 1993. I lived alone and was single, spending most of my spare time drinking and watching the best exploitation the Indian owned video store on the other side of the alley had to offer.
The store had ratty water-stained carpet, and was shoved into what must have been an insurance office or apartment leasing agency in the 1970’s. There were 3 rooms. The counter was at the entrance. The owner was in his 50’s, and ran the place full time. He could usually be found watching a small TV, tuning into Phil Donahue or the WHAS news. The next room had a modest shelf of allegedly new releases. Comedies and children’s fare rounded out this room. They were priced so much higher than the catalog items, I never bothered to see what he had.
The third room is where the action was. Horror, drama, action, mystery packaged in lurid boxes with sensational pictures of naked writhing Nazi hookers, loin-clothed cannibals feasting on witless anthropologists, shirtless black men who were done with whitey’s shit, and sweat drenched leering serial killers. This was where I spent most of my money.
I discovered Ilsa- She Wolf of the SS, Jungle Holocaust, Story of O, Maniac, The Crazies, Martin, Cannibal Ferrox, Reanimator, Bloodsucking Freaks, X-Tro, and the perverse joy of Jess Franco here.
I also discovered Dolomite, Shaft, and Super Fly. Rudy Ray Moore in particular brought me a lot of delight during this time. I quickly plowed through trilogy of Dolomite, The Human Tornado, and Avenging Disco Godfather. One day, on a whim, I was browsing the front of the store, going through the comedy section. There it was, Yaphet Kodo and Rudy Ray Moore teamed up in something called The Monkey Hustle. I put back Raging Bull and added this new mystery to my stack. I dropped the tapes off at home, and made it down the street to the liquor store for dinner.
A few hours later, well after the video store closed, I put in the tape. I had a top-loading VHS with a bad rewind button that I bought off my old room mate for $25. Before I could return tapes, I had to let the tape play to the end and rewind automatically so as to avoid the very serious $1 rewind fees. We had some serious troubles in the first days of the Clinton era. 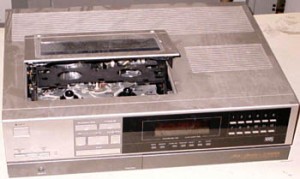 Anyway, I pressed play. The screen flickered, then nothing. A clicking came from the tape machine. I ejected the tape which, by the way, took like 3 minutes. Life was tough.
The tape was broken. I was an audio engineer at a radio station at the time, but didn’t feel qualified to fix the tape. Commercial VHS tapes cost anywhere from fifty to a couple of hundred dollars, and had all kinds of tamper proof tape on them to prevent theft. People would actually swap the tape inside the shell for a cheap consumer grade tape with something else on it entirely. Explaining to a store owner that the tape you rented was broken, taped over, swapped out, un-rewound, late, or lost was putting yourself at the mercy of a person who could make up any rule they wanted on the spot, and who could charge you any amount they felt like based on a totally unknowable formula. At worst, they could say you owed them $120 for a replacement tape, which was the same as them saying “sorry, you’ve lost your rental privileges. Forever.”
Apparently my five tape a week habit put me in the owner’s good graces. He may have even let me rent something else for free in its place. Maybe that’s when I got Raging Bull. I never made it to the end of that one, passing out around my 16th beer at 5 AM.
A few months later, my apartment was broken into in the middle of thee day. My VCR, TV, CD player, and stereo were stolen.
I didn’t have a VCR again until 1998.
Posted by Hectic Engine at 1:13 PM No comments: