At the urging of Max Romero I have just watched 1982's Swamp Thing for what may be the last time. In the 30 years since it was released, I try to watch it again every 5 years or so.  This may be only the third time I've made it all the way through after over a dozen partial viewings.

Why would I give Wes Craven's least-loved pre-Nightmare movie so much time and consideration? Because I want so badly for it to be my favorite comic book adaptation of all time. Each screening has me rooting for it, begging it to unveil some hidden charm I missed on the previous pass. I want to be scared, I want the swamp to feel forboding, I want to find Adrienne Barbeau remotely attractive.  I want to finally understand why the black kid who can't act is in the movie. I even want to know why Ray Wise and Louis Jordan, both of whom CAN act, are in this.

Why do I care so much? Craven is an excellent horror director, and Last House On The Left is one of the strongest horror films of the 70s. In turn, the Len Wein, Bernie Wrightson run of Swamp Thing on which the film is based are among the best horror comics of the 70s. On paper, this translation should be the best monster movie since Creature From The Black Lagoon.

The story, in essence: Stationed in the bayous of Louisiana, scientist Alec Holland and his wife Linda strive to create a bio-restorative formula to solve the coming food shortage. He and Linda are sabotaged blown up by agents of an evil corporation. Linda dies outright, but Alec is doused with their formula, and runs burning into the swamp which (naturally) turns him into a muck-encrusted mockery of a man. He searches to regain his humanity. Along the way he becomes the arch-nemesis of mad scientist Anton Arcane, and encounters a wide assortment of monsters including a werewolf, a demonic priest, an alien, radioactive children, and Batman in his brief stellar run. The stories were moody, poetic, and introspective monster comics.

The first 10 issues of the series made a huge impact on many that read them, including horror director Wes Craven. With a string of thoughtful and disturbing horror classics behind him, Craven was a brilliant choice to adapt what was arguably the best horror comic series of that decade to film.

The version on Netflix Streaming is what is called the European version. The American version was PG, but the Euro one contained, to my understanding, a brief scene of Barbeau bathing topless in the swamp. When I pressed play, the opening credits were in French, so I figured I was about to see this elusive version. For the curious, it is called "La Creature Du Marais" in French.

It turns out that the bathing scene wasn't the only cut footage in the PG edition. There is a scene of decadence in the villain's castle. Essentially, there is a sex club set up right outside his dining room complete with topless exotic dancing, and sensual breast play available to Arcane's hired help. No American employer offers such decadent benefits.

Why do the breasts 72 minus into the movie matter in this review? I'm glad you asked.

The film begins with several establishing shots of the swamp. Time is taken to establish the trees, marshes, and the rest of the bayou habitat as a character. The camera then takes us above the canopy of the glade to a helicopter where we meet Barbeau's character, Abby Cable. This beginning is identical to the start of most every European cannibal film of the 70s. We are the white outsider being ferried into a secluded land beyond our understanding. Much of the opening dialog reinforces this idea of the swamp as character. We are promised something scary and surprising that will shake our civilized selves to the core.

By the time we are ten minutes in, this idea is entirely dropped. The only hint that this is a horror film with roots in 70s exploitation and man vs nature metaphor is when we are introduced to the breasts. Abby Cable's are shown to demonstrate how lovely, natural, and peaceful the swamp can be. The roughly handled breast at Arcane's villa is decadent, and indicates Arcane's intention to go against nature, looking for a capitalistic solution to the limits of mortality.

It's clear that Wes Craven loves the source material. I don't know if the restrictions of working with material owned by a media conglomerate limited his film making instincts, or if there was some important connective tissue left on the cutting room floor. The casting was good, with Ray Wise looking exactly like a Bernie Wrightson drawing, and Louis Jourdan striking the right tone between serious scientist and megalomaniac. Unfortunately, casting isn't enough.

I have heard the movie catch a lot of crap for the Swamp Thing's rubber suit. I have a large suspension of disbelief for that kind of effect, and don't even mind when you can see the suit's pants fold and shift during action scenes. It's fine, really. The trouble comes at the end when, predictably, you end up with a monster vs monster showdown between Swamp Thing and the immortality grasping Arcane.

With each subsequent appearance in the comic, Arcane becomes more horrifying. He goes from old mad scientist, to malformed subject of his own experiments, to a truly inhuman bug-meat hybrid. Every artist that has drawn him has brought something new and upped the ante first established by Bernie Wrightson.

Stakes were high on Arcane looking like the bad Uncle that haunts your dreams and sends you to therapy.

Audiences were rewarded with a rubber horse in a fright wig: 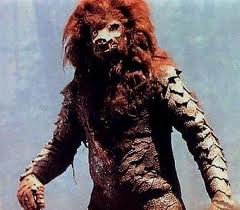 Dude, your fly's down.

By comparison, here's an illustration by Steve Bissette showing Arcane in 3 of his better-known comic book iterations: 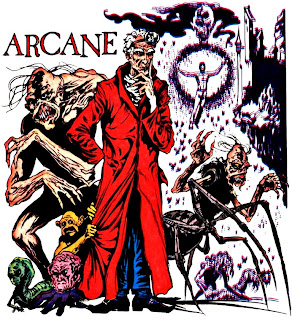 Creepy Uncle Will Fuck You Up

Seriously, there is no comparison. It’s ludicrous. Nothing about the movie costume for Arcane makes sense. Swamp Thing's rubber suit actually looks like a guy who had his laboratory explode in his face, caught fire, and had moss grown back over his skin. Jordan’s Arcane looks like a dude that forgot to rent his Halloween costume at 8PM on October 31. It's embarrassing and deflates a lot of the potential tension in the film's final conflict between the monsters.

Overall, the movie is pleasant and watchable enough. Sadly, it never really commands your attention.

Posted by Hectic Engine at 6:02 PM