Savior of the Comics Industry

This week DC Comics began an partnership with Walmart to reach new comics readers. The publishing plan includes 4 periodicals, each focused on a different family of characters. For $4.99 you get 100 pages of comics containing 3 reprints and 1 new story. The books are Batman, Teen Titans, Superman, and Justice League of America.

They selected a format that has roots going back to a 1977 initiative called Dollar Comics. The Dollar Comic format was the brainchild of then-new DC publisher Jeanette Khan. The idea was to get better rack space and compete with higher priced magazines on the new stand. Comics of the time were about $.35 for 17-22 pages of story. The Dollar Comics were a buck, and features 80 pages of comics.   They started with 4 books- Superman Family, World's Finest, G.I. Combat, and House of Mystery. The comics featured all new content, and stared with a few months of covers by Neal Adams. The format ran 5 years, and at its peak there were 8 periodicals that fell under the Dollar umbrella.

Every few years Marvel or DC will try something different to reclaim the casual reader market, and to help build tomorrow's serious buyer. For example, around 2002 Marvel tried a format not unlike what DC is doing now. At the time I planned to write about them, but gave up after trips to 9 different newsstands resulted in 0 comics found. More recently, Marvel partnered with Archie comics to get digest-sized comics into grocery stores. I've yet to see one.

With the past success rate being based on a failure at the distribution side, I did have hopes that Walmart acting as an exclusive partner would fix that piece. This morning a few comics news sites showed off photos of what to expect, and offered guidance on where to find these new comics in the stores. The pictures on The Beat showed a nicely designed POS display neatly organized with about 20 copies total of the 4 books. The display was shelved with their pop culture items like Pokemon, You Gi Oh cards and Walking Dead toys. I threw on some clothes and headed to the nearest Walmart to test things out.

The display unit was nowhere to be seen, but I was hopeful. I've been reading comics since 1975 and have radar for this kind of thing. The pop-culture section was four or five 15' long cluttered shelves. After couple of minutes, I spotted the comics. 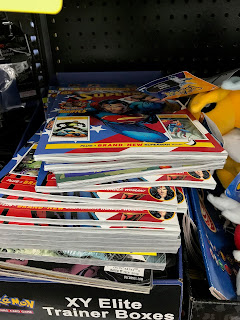 Apparently the Walmart just outside East Dallas in Garland, Texas is not going to be the savior of the comics industry.

Poor merchandising aside, I grabbed one of each book and made it back home with the first comics I've purchased at a non-speciality store in over 20 years.

It's very possible that in my greed I denied the Jack Kirby of 2030 from ever discovering comics by buying the book that sent them on a path of creative dominance and influence through the back half of the 21st Century. My sincere apologies to that young girl or boy, and to Disney for not being able to prey on their efforts, which will cause them to go bankrupt slightly before the heat death of the universe instead of just after.

How about the comics? Hey, they are pretty good! I'm not up on everything that happens in modern comics, but I was familiar with most of the choices they made for the reprint parts of the books. Justice League featured the first issues of the "New 52" JLA, Aquaman, and Flash series, and a brand new Wonder Woman story. Teen Titans contained the first issue of the very good 2005 revival by Johns and McKone, a recent feature called Super Sons which I have heard good things about, a series called Sideways that looks like a Spider-Man pastiche, and a new Teen Titans  story. Batman is serializing Hush, and features reprints of Nightwing and Harley Quinn on top of a new Batman tale. Lastly, Superman starts with a new story and contains the very entertaining Loeb/McGuiness Superman/Batman series, the Geoff Johns Green Lantern relaunch, and the recent and incredibly fun Terrifics series by Jeff Lemire. 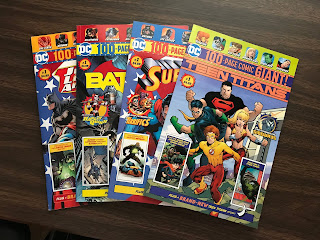 I'm not familiar with everything in the 400 pages, but based on what I do know, they made some great choices for this kind of book.

DC and Walmart did something smart, brave, and exciting here. Will it work? It is really hard to say. I would love to think these 4 books could flourish and set an example that could result in comics racks in every store 1977 style. I truly hope every copy of these doesn't go to some 47 year old with a nostalgia problem. The idea that there is a child born in 2013 who is about to have their whole world turned upside down for just $5 is thrilling to think about.

The Dollar Comics mentioned above faded away by 1982. A few years later in 1988, they tried something different. It started with a modest cardboard POS display filled with just a few books. Watchmen, Batman the Dark Knight, New Teen Titans, Man of Steel, Swamp Thing, and a couple of others. They were trying to cultivate an audience of adult readers through the book store market. That experiment went pretty well, and built a new category of books that didn't exist before. In fact, that success refocused the whole industry, and contributed to the death of "new reader friendly" comics.

I've got high hopes they can pull this off, and keep people interested in comics at every age.