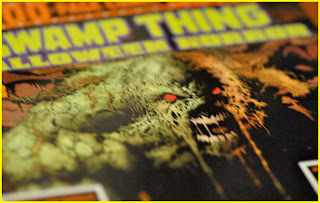 DC and Walmart continue their partnership to draw in new readers with a pretty exciting Halloween Special. Following 3 months of serialized adventures with Batman, Superman, and other costumed heroes, DC released the first one-shot issue for Walmart, the Swamp Thing Halloween Horror Giant. At 100 pages, only 20 of them feature Swamp Thing. How did the character get to be the biggest selling point? There's some history behind putting the big green plant man in the forefront.

Through 5 decades, Swamp Thing has been at or near the center of many of the largest publishing initiatives DC has implemented. DC leaned heavily on reprints of the original Len Wein/Bernie Wrightson run when testing out new formats in the late 70s. The first DC movie following Superman's success was Swamp Thing. The initial volume of Swamp Thing by Alan Moore, Steve Bissette, and John Totleben was the 4th entry in their graphic novel line in 1987, following Dark Knight Returns and preceding Watchmen. Later, ST was the starting point for the adult oriented Vertigo line that literally grew out of the success of Alan Moore's run. Next year, DC's streaming service is launching a Swamp Thing TV show. It's the character's second. Third, if you count the cartoon.

Based on my own observations through various message boards and Facebook communities, this release stands to be a massive hit with middle aged readers who have been enjoying comics for 20 or more years. Can it get a $5 bill out of a teenage reader’s pocket though? That’s a tough one.

The original story by Brian Azzarello and Greg Capullo is tough to measure. Basically, 12 pages isn’t enough to really know what is happening. It definitely felt like a try out for an ongoing series. That makes me wonder if it was produced for this special, or is a leftover from last year’s Swamp Thing Winter Special that didn’t make it in.

The writing. I have a problem with Azzarello’s writing that I can never shake off. I always feel like he is lying to me. I don’t trust that he as an author or the characters in his work are being sincere or direct at all. I tried 100 Bullets for a couple of years, but always felt like the leads were tricking me. On the other hand, that tension worked for me in his Hellblazer and Luke Cage stories.

The story is from the perspective of a one eyed woman with a strange connection to Swamp Thing. She seems to live in the swamps of Louisiana, and the brief tale explains her missing eye and the connection she shares with Swamp Thing. The horror threat is potent enough for such a short story, but does resolve so quickly that it feels like a set up for a longer series. Just enough story to make you curious, but not so much that you would feel ripped off if more chapters never arrived.

How’s the art? Exquisite. Greg Capullo is in his environment here. The designs of Swamp Thing, lady one-eye, the monsters, and the victims are just the right amount of creepy. There is a wicker doll that the mysterious woman carries that is rich in detail that is both beautiful and unsettling. I don’t know if they would place such a high profile artist on Swamp Thing, but I would be all over it if they did.

What else is in the package? As with all the 100 Page Giant books, this one has 88 pages of reprints and ads. The reprints come from 2 past DC Halloween specials and feature Zatanna and Blue Devil. I have no idea why Blue Devil was chosen to be in this, but there he is. There is also an Aquaman/Demon tale. With an Aquaman movie coming along shortly, I get that. Batman always finds his way into everything. They took the interesting step of picking a Denny O’Neil/Neal Adams classic from the early 1970s called Night of the Reaper. It’s a solid tale full of atmosphere, and is the first pre-2000 comic to make it into one of these books.

That brings us to the final tale, the original Swamp Thing story from 1971. I was expecting something from either the Alan Moore run, the recent New 52 series, or the Tom King story from last year’s Winter Special. This was a very pleasant surprise, and proves that when DC is breaking new ground, the specter of Wein, Wrightson and their swamp monster is never far behind.

Posted by Hectic Engine at 5:18 PM