My first encounter with Falcon was in Captain America 188, cover dated August 1975. I had been reading comic books for three months, and this was my fifth one. I was almost 5, and was struggling to piece together why Spider-Man wasn't in the Super Friends. Captain America brought something new to the emergent cosmology. A black hero!

I was barely becoming cognizant of skin color. I knew it was a thing, and somewhere I had picked up the verbal trend of referring to black versions of things very specifically. As a result, I thought the character was Black Falcon for a couple of years. Compounding the confusion. a cartoon called Blue Falcon and Dynomutt hit the airwaves in 1977. That undoubtedly solidified my mistake about the name.

The character seemed very cool. Red wings, bare arms, no cape. Trained pet falcon sidekick named Redwing. The design was dynamic and interesting. It was really hard to draw, so I knew it must be high quality. Harder to draw than Iron Man, not as difficult as Dr. Strange.

He made his first appearance in Captain America 117 right around the time of the Moon landing. Sam Wilson was Marvel's second  black character, and become a regular cast member in Cap's comic pretty soon. The initial costume wasn't very falcony. Wilson's Falcon outfit was a wingless green disco leotard with orange detailing and a red falcon medallion. Falcon looked just as ready to go on Soul Train as he did to fight crime and kick whitey's Nazi ass with his best friend Captain America. Gene Colon was an amazing artist, but that design was not his best. Stan Lee wrote a solid intro, and later writers really ran with the character, giving him a lot of depth.

The Captain America comic was renamed Captain America and the Falcon for several years. When Kirby came back to Marvel in 1976 he kept the configuration. This was one of the few times Kirby wrote a character he didn't create. He took on Black Panther at the same time, so for about a year, two of Marvel's three black-lead books were written and drawn by the same 50 year old New York Jew.

Falcon came and went in the comics. A one shot in Marvel Premiere around 1979 was done by a totally different Jewish writer that, coincidentally, was once Kirby's assistant. A Limited Series in the 80s was actually written and drawn by 2 black creators! Falcon didn't turn up much, but when he did he was typically treated with love and respect by the creative teams.

Falcon's origin was in 3 parts, which was fairly unusual for a story of that era. While working out my rules for buying the first appearances of black characters, I had to create a special set of rules for Falcon. He changed a lot in his early years, so there were several firsts as he evolved. I picked up not only the 3 part origin tale, but the debut of his red and white costume with the non-functional wings, the issue where Black Panther makes the wings functional for flight, the first time Kirby wrote and drew him, the first time he starred in a solo story, and his solo Limited Series. OK, all of those "rules" were just excuses to enjoy more stories with the Black Falcon. I mean Falcon. Old habits. 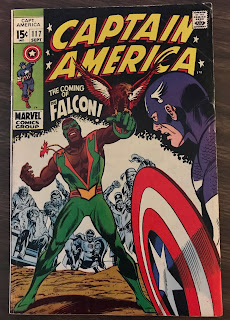 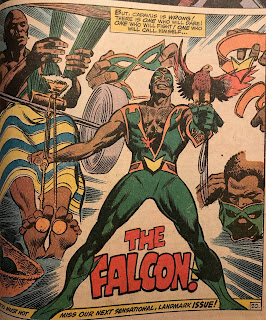 Posted by Hectic Engine at 2:00 AM