Let's take a look at May 31 2017. You are all a smart bunch. If you don't find conspiracy theories interesting, funny, or sociologically significant, do move on. This is presented as humor, and is in no way intended to spark an actual conspiracy theory. 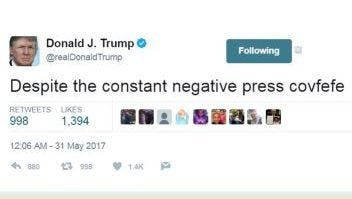 Soon after we heard from DT and Sean Spicer attempt to validate that "Covfefe" was more than the final taps of a man falling asleep Tweeting on the toilet.

From USA Today, May 31 2018 in a One year Retrospective of The Word That Would Not Die: Trump says ‘covfefe’ might have ‘deep meaning’

"Despite the negative press covfefe," the tweet read, and nothing more.He soon deleted the tweet, but instead of pretending it never happened, he leaned into it."Who can figure out the true meaning of 'covfefe' ??? Enjoy!" he said nearly six hours after the original tweet went out.
Not helping the matter was then-Press Secretary Sean Spicer's insistence that covfefe made sense. He said people shouldn't be concerned about the tweet and the fact that it was up for hours."I think the president and a small group of people know exactly what he meant," Spicer said.

Here we all are, 3 years later. Sheltering in place, delighting in self-quarantine, working from home, We subsist on reams of toilet paper while Googling how to make the perfect hominy, tuna, and pickled beet chili. Covid-19 is here, it's hip, it is NOW! We are keeping our distance, ignoring the expiration dates, and signing up for every free trial to binge-watch the end times. No need to cancel, that $1000 check will be here any minute courtesy of a substitute mail carrier with a dry cough.

Was DT spitballing names? Was he trying to type Covid-19 and couldn't remember the code word? Was this the beta version that didn't launch? Back to the drawing board? Is he a narcoleptic Nostradamus? Does a golden toilet portend great vision and precognition? Have we found the savant to his idiot? I mean, just today he spent 4 minutes talking about "studying" a vaccine. Behind him at the dais, a steely eyed science lady was moments from screaming "it's a clinical study, not study like a test, which you have clearly never done, you infantile narcissistic monster!!".

We knew something was coming. We knew we couldn't just get in and out in four years with nothing big happening. That it turned out to be a global pandemic was just the luck of the draw. I mean, who knew pandemics could be so hard?