Dall-E vs Engine A

Engine is a word filled with possibility. It embodies the action, motion, and spark that initiates motion and fuels the 20th Century. In 1994 I was trying to name my small press publishing enterprise, and also come up with the name for a graphic novel or series title. My first full length comic book, Slacknuts, was almost done and I needed a name to publish it under. While taking notes on the next project and toying around with words, the phrase "Engine A" came to mind. What was it?

I imagined a massive mechanical cube that generated the energy fueling creativity for the Universe. It was some Kirby/Arthur C. Clarke thing floating between the known and unknown, one of several similar engines that created the fundamental elements of the Universe. Engine A came first, as it was the creative spark for every idea. Engine B was probably matter, and C was life. Engine A infused everything with just the amount of creativity it needed to be the thing it was. 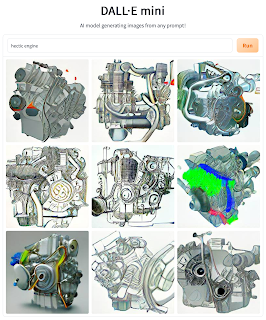 Dall-E mini is a computing project where inputted text is translated by the program into images. The outcomes are based on the program’s study of all of the information available to it, and reflects how the program has come to interpret that data. The results are beautiful, eerie, absurd, funny, complex, mystifying, unsettling, and even awe-inducing. They are also very, very widely open to interpretation as creations. The product calls into question a lot of assumptions about how abstract and concrete symbols interact. More so, it calls into question what we call art.

Humans have a hard time when non-humans create art. In the US, copyright can’t be applied to works created by non-human animals. Further, the artistic product of an animal cannot be claimed by a person. The work is inherently public domain.

When discussing corporate ownership of copyright, work for hire arrangements are at the heart of the system. Big Corporation supplies a creator with a directive, and owns the work. If a zoologist, farmer, or pet owner teaches an animal to paint and supplies the materials to create work, no one owns it. If Disney directs me to paint something and supplies the materials to create the work, Disney owns it.

Disney employs animal actors in live action productions, and have done so for over 60 years. These works are not in public domain, and the animal actors have the same stake in the product as do the human crew. International Velvet's equine star was non-union and presumably didn't see the same royalties as Tatum O'Neal.

So what is Dall-E? Am I the creator since I chose the words the program interpreted? Does the programmer own every piece of art the program creates? Is it all public domain for now, until our laws are forced to interpret an AI’s legal standing in a few years? Are we seeing a brief return to the legal Wild West of the Internet while this question is settled?

Copyright and all of the rights that derive from that concept were last tested and re-evaluated when media downloading became technologically available to a mass audience.

Just 20 years earlier the VCR and compact cassette tapes were the last big test, as “personal use” was literally on trial. In the early 90s, DAT didn't replace the cassette the way CDs replaced vinyl. The corporations figured out the best way to fight a new technology is to kill it early before the unwashed can make hay with it. In the case of DAT, the outcome didn't matter because taping was on the verge of irrelevance. Computer adoption fueled CD burning. The Internet helped people figure out that the CD was an unnecessary step. You only needed the file, and the file can travel anywhere in minutes. This took music labels by surprise. Hay was being made by millennial college students, and that was not going to stand.

Copyright is tweaked and reinterpreted regularly to adjust to culture. Almost generationally, the culture and technology of creating art and distributing art are upended. The more efficient a technology is at recording and distribution,  the more likely it is to have a large-scale impact on the law.

The tension between corporate and individual rights and how they relate to new recording and distribution methods has a pattern. The outcomes favor the consumer only to the point that a corporation’s compulsion to make money is not seriously abridged. Once the ability for a corporation to make money off of what individual’s were getting for free is restored, then all is well and the legal fight is considered over.

When is the last time you saw a headline about a woman being fined $1.7 million for downloading a Hanson album? Once the music labels won through brute force and infinite money, the need to threaten and shakedown individual file sharers passed. The legal precedent was set and we all agreed that you wouldn’t download a car. In the mid-80s, home taping decidedly did not kill music. In 2030 will works derived from collaboration with a computer be copyrightable? Yes, it is inevitable as soon as Disney needs to own something created by AI.

For now, we can all have fun typing directives into Dall-E and sharing the outcome. Right now, we exist in the space between what was and what will be. The space where possibility seems infinite. Where the new frontier is un-bought and un-bossed by the looming attention of corporations and their need to own it all.

Anathematician is not a real word. It popped into my head and I wrote it down, thinking it may lead to something else. It didn't, but the word has stuck with me for 25 years. It lives with Engine A, Hectic Engine, Psychobet, Bicycle Shark, and other ideas safely stored away in sketchbooks and college ruled journals. I own them. 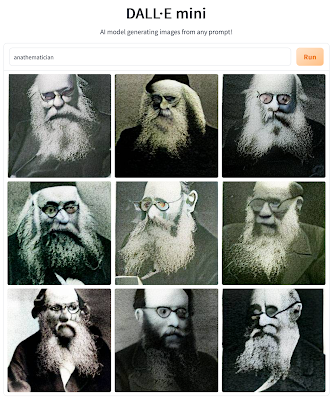 Posted by Hectic Engine at 8:52 AM