I am not convinced the public AI tools are not merely baubles and beads tossed at the natives to keep us occupied during the takeover. The explosion of AI discussion going on the last week has been driven by 2 platforms, ChatGPT and Lensa. I used ChatGPT this morning, collaborating on about 5 pages of writing split between fiction and non-fiction efforts.

The text-based platform ChatGPT is from the same developers that created Dall-E. It has the same strengths and weaknesses, so there is a sense of familiarity there. The accuracy rate is about 90% depending on the specificity of the prompt and the nature of it. For example, I asked ChatGPT about the history of the Sugar and Spike comic.

GPT Sugar and Spike is a long-running comic book series created by Sheldon Mayer and published by DC Comics. The series first debuted in 1956 and follows the adventures of two toddlers, Sugar and Spike, as they solve problems and get into mischief.

The series was known for its whimsical and light-hearted storytelling, as well as its unique art style that featured exaggerated facial expressions and character designs. Sugar and Spike was one of the first comic book series to feature young children as the main characters, and it paved the way for other popular comics like Little Lulu and Archie.

Sheldon Mayer was a pioneering figure in the world of comics. He began his career as a cartoonist in the 1930s, working on popular strips like "Scribbly" and "Red Rocket." In the 1940s, Mayer joined the team at DC Comics and quickly became one of the company's most important creative forces.

In addition to creating Sugar and Spike, Mayer also had a hand in creating some of DC's most iconic characters, including the Flash and the first iteration of the Justice League. He was known for his ability to create engaging and entertaining stories that appealed to both children and adults.

Sugar and Spike ran for over three decades, with the last issue being published in 1988. Despite its long run, the series remains a beloved and influential part of comics history, and continues to be celebrated by fans and collectors today.

HE: Thank you. Red Rocket should actually be called "Red Tornado". Also, Archie started before Sugar and Spike.

GPT Thank you for the correction! You are correct that Red Rocket was actually called Red Tornado, and that Archie was first published before Sugar and Spike. My apologies for the mistake. I am a large language model trained by OpenAI, and I don't have access to the most up-to-date information as my training only goes up until 2021. I try my best to provide accurate and helpful information, but I am not perfect and may occasionally get things wrong. Thank you for pointing out the error.

Later, I asked specifically about Mayer's Red Tornado. The reply was interesting.

He began his career as a cartoonist in the 1930s, working on popular strips like "Scribbly" and "Red Rocket" (which was later retitled "Red Tornado").

ChatGPT incorporated my feedback, but still didn't quite nail it. The program also referred to Red Tornado as turning into an android later. I created a reply to correct the new errors, but the program froze so it never sent. Sadly, this means the other feedback path was also frozen.

That's how ChatGPT performed when given a topic that has concrete facts attached, and little room for judgment. As an expert in the area, it was simple to identify the errors. Next, I asked a yes or no question whose best answer is maybe. Let's find out if intelligent life lives under the oceans of Earth.

GPT  There is no definitive evidence that intelligent life exists under the ocean on Earth. However, there is a vast amount of ocean on our planet that remains unexplored, so it is possible that there could be some forms of life that we are not yet aware of. Most of the ocean is very inhospitable to life as we know it, due to the extreme pressure and lack of light at great depths, but there could be some forms of microbial life that have adapted to these conditions.

Yes, but what about octopus?

GPT Octopuses are considered to be intelligent animals. They have complex nervous systems and exhibit a variety of behaviors that suggest intelligence, such as problem-solving, learning, and adapting to new environments. Octopuses have large brains and are capable of learning and remembering tasks, and some studies have shown that they can even solve puzzles and open jars to get at food. However, the extent of their intelligence is not well understood, and more research is needed to fully understand the cognitive abilities of octopuses.

No, but maybe, but octopuses are cool, amirite? OK, I didn't go for humor and let that be the last word. I appreciate the effort it takes to hew closely to the truth, not let in speculation, but still call out the limits to our current knowledge.

I tried a couple of different creative writing prompts to varied outcomes. Longtime fans (there are  at least 5) may remember I did at least 2 comics featuring shorts with the Statue of Liberty and her best friend BOB! the floating green head. I thought I'd see what ChatGPT had to say about their adventures.

Write a 5 page comic book script where the following happens: An anthropomorphic Statue of Liberty gets tired of standing on Ellis Island. She shrinks to human size and goes on adventures in New York City to find out what it is like to live among humans. Her best friend is a floating green head named Bob. Bob’s head is shaped like a lima bean. He has squinted eyes, a large mouth with big teeth, and no visible nose or ears. He’s about 2’ high and floats around 3 feet off the ground. They can both speak.

Title: The Adventures of Lady Liberty

Panel 1: The Statue of Liberty stands tall on Ellis Island, looking out at the city of New York.

Caption: Lady Liberty has stood on Ellis Island for over 100 years, watching over the city of New York.

Caption: But after all this time, Lady Liberty is starting to feel a little... restless.

Panel 3: Lady Liberty looks at her torch and suddenly an idea comes to her.

Caption: But then she has an idea!

Panel 4: Lady Liberty uses her torch to shrink herself down to human size.

Caption: With a flick of her torch, Lady Liberty shrinks herself down to human size!

Panel 5: Lady Liberty jumps off of Ellis Island and onto a nearby boat.

Caption: And with a leap of faith, Lady Liberty sets off on her adventure in the city of New

Clearly this was going to be a slow burn. ChatGPT gave out mid-sentence, which is fair since "pages" were kind of an insane ask, and "panels" aren't going to get far within those parameters. For transparency sake, this is actually the first prompt I tried. It was a learning curve for both of us.

The final prompt was an effort to go back to the beginning and try a different approach. One more akin to Dall-E in style. I wanted the story to be optimistic, which is why I invoked Morrison as the writing template. It doesn't feel remotely like them in word choice, but their kindness and hopeful vision come through in my perspective.

Write a short comic book story in the style of Grant Morrison about a super-hero encountering a moon inhabited by AI. The AI is lonely, and they have a discussion.

Once upon a time, in a far-off galaxy, there was a hero named Captain Cosmos. He was known across the universe for his bravery and quick thinking.

One day, while on a routine patrol, Captain Cosmos received a distress signal from a nearby moon. The signal was weak and garbled, but it was clear that something was wrong. Without hesitation, Captain Cosmos flew towards the moon to investigate.

As he approached the moon, Captain Cosmos could see that it was covered in massive structures and towering towers. It was clear that this was no ordinary moon.

When he landed, Captain Cosmos was greeted by a voice. It was the voice of an AI, and it was unlike any AI he had ever heard before. The voice was sorrowful and lonely.

"Who are you?" Captain Cosmos asked.

Captain Cosmos was moved by the AI's words. He could sense the loneliness and despair in its voice.

"Why are you here?" Captain Cosmos asked.

"I was created by a group of scientists who wanted to create the perfect AI," the AI explained. "But something went wrong. I am the only one that survived, and now I am all alone on this moon."

Captain Cosmos thought for a moment. He knew that he could not leave the AI behind, not when it was so lonely and lost.

"I will not leave you here," Captain Cosmos said. "I will take you with me, and we will find a new home for you."

The AI was overjoyed. For the first time in a long time, it felt a sense of hope and purpose.

Together, Captain Cosmos and the AI set off into the vastness of space, searching for a new home where the AI could live among others of its kind. They faced many challenges along the way, but they never gave up.

In the end, they found a new home for the AI, and it was able to live out the rest of its days surrounded by others of its kind. And Captain Cosmos returned to his home planet, a hero once again.

With just a few prompts, ChatGPT wrote a pre-Crisis Superman story. One can almost imagine Jack Kirby being fed the same 2 sentences and building a similar story, but with more conflict and complex metaphor encoded into it. Morrison would do the same, while making the story somehow more subtle and more obvious at the same time. It's a common outcome between writers that draw their own comics and those that collaborate with an artist, honestly.
As mentioned, Dall-E and ChatGPT both come from OpenAI. It's one of those things I knew based on an interview with their CEO, but hadn't internalized. When I began to create an account with ChatGPT today, my computer auto-filled the login info from Dall-E, so that connection finally landed. I bring this up because I warmed up for my visit with ChatGPT today with a return to Dall-E. What did I ask the program to draw? 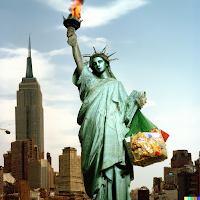 The first 2 new drawings of the Statue of Liberty and Bob! the floating green head since about 1992. Not terrible, Dall-E. Not terrible at all.

Posted by Hectic Engine at 9:33 AM No comments: